In early August 2016, 24 early career scientists set sail from Woods Hole, Massachusetts on research cruise AT-36 to the northwest Atlantic continental slope. There, more than a kilometer beneath the water’s surface, new methane seeps and coral habitat had recently been discovered, and the multidisciplinary team of scientists was eager to conduct a more thorough investigation.

The primary aim of the expedition was to train young researchers (and potential future users) on the operational realities and scientific capabilities of National Deep Submergence Facility (NDSF) assets. With this in mind, the Research Vessel Atlantis was filled to the brim with an impressive technical arsenal. The human occupied submersible Alvin shared deck space with the autonomous underwater vehicle Sentry and a number of more standard oceanographic tools; daily plans sought to leverage these complementary capabilities in support of an integrated scientific program.

Among the scientific team were several members of the C-DEBI community, including Roman Barco, Anne Dekas, Colleen Hoffman, and Katrina Twing. It was a natural fit: “C-DEBI is committed to pursuing hypothesis-driven research in marine sediments and the marine subsurface,” says Dekas, who served as the co-chief scientist aboard the cruise. “Few oceanographic tools can sample the deep sea as precisely as those in the NDSF, making them an ideal fit for C-DEBI work.”

Barco traces his current deep sea research back to his time as a C-DEBI graduate fellow. “It developed as a side project years ago,” he recalls, “which was an investigation of the microbial colonization of different types of minerals in near-shore waters. This led to hypotheses about the deep-sea and the ocean floor, and I started thinking more actively about going deeper and participating in sampling opportunities with the use NDSF vehicles.” 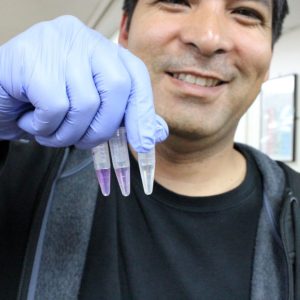 AT-36 exposed Barco and the other early career scientists to all dimensions of such sampling opportunities. Some days, the team had an embarrassment of riches, leading to long nights of data and sample processing; on other days, technical issues and shifting schedules created a challenging logistical puzzle. Mid-way through the cruise, the plan called for two “bounce dives” – short and typically shallow Alvin sojourns that require an intricate series of procedural steps to go like clockwork. But as the sub was being readied for action, an electrical glitch was found. “At first, the delay was 30 minutes,” explains Dekas, “but it soon stretched to another 30 minutes, and then another. It didn’t seem like the problem was going to be fixed any time soon.” After consulting with her fellow scientists, the Alvin team, the ship’s crew, and the expedition’s all-star team of mentors, Dekas came up with a plan. “We could cancel the first bounce dive scheduled that day, but we could make up for it later in the trip,” she recalls. “All of the originally-scheduled divers would still be able to go down, and our science objectives would still be met.”

“I learned that one of the most essential and exciting aspects of deep-sea research is responding to unexpected challenges with deliberate, logical thinking, weighing the trade-offs of alternative plans, and acting quickly enough so that additional opportunities are not lost. It was actually one of my favorite moments of the cruise.” 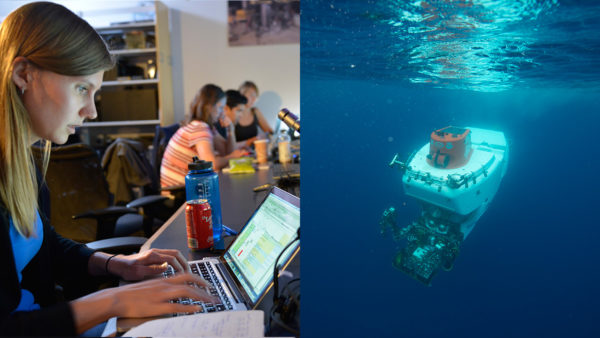 In addition to the full scientific program and ambitious schedule of training sessions, AT-36 used telepresence to connect scientists ashore with those on the Atlantis via two-way audio and video feeds in real time. At any given time, half of the scientific party was aboard the ship, while the other half supported the effort from the Inner Space Center at the University of Rhode Island. Telepresence has been incorporated into exploratory efforts of remotely operated vehicles for several years, but its use for research-oriented and sample processing-based expeditions was largely untested.

While the scientific bounty of AT-36 will likely be analyzed for years to come, participants are excitedly planning their next moves based on the lessons gleaned from the expedition. “This was my first experience at sea,” says Hoffman, “and it has really helped me learn what questions should be asked in the pre-cruise planning process for deep-sea work, as well as the capabilities of NDSF assets to do the kind of trace metal clean work I’m interested in.” 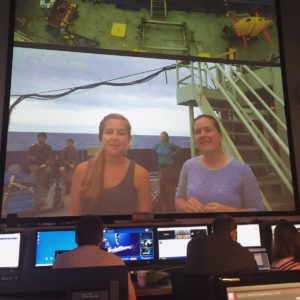