The Juan de Fuca Ridge flank (JdF) major program is exploring the nature of linked hydrogeologic, geochemical, and microbiological conditions and processes in a region that is the best understood example of ridge-flank hydrothermal circulation on the planet. In this setting, a volcanic crustal aquifer contains highly altered (suboxic to anoxic), warm (64 °C) hydrothermal fluids that are isolated from the overlying ocean in most locations by hundreds of meters of hemipelagic sediment and turbidites. Projects using data and field samples from this region have included two IODP expeditions (301 and 327); long-term borehole observatories (CORKs) used for testing, monitoring and sampling; and numerous non-drilling oceanographic expeditions using oceanographic ships and submersibles/ROVs, laboratory studies using materials and associated microbial cultures, and theoretical and computational experiments. Tools and methods developed for the JdF program have been adapted and applied at other sites, including other C-DEBI major program locations. The JdF major program has contributed to training of numerous graduate and undergraduate students and other junior researchers, including those who add diversity to the STEM pipeline; has linked researchers and students from across the US and around the world, who work on common technical and scientific goals; and has comprised the basis for several successful education and outreach programs to the K-12 community and the public at large. More specifically, the JdF major program has explored these and related questions:

Answering these and related questions will help to achieve goals important to Phase 2 of C-DEBI, within all three of the new program themes (Connectivity and Fluxes, Activities and Communities, Metabolism and Survival). 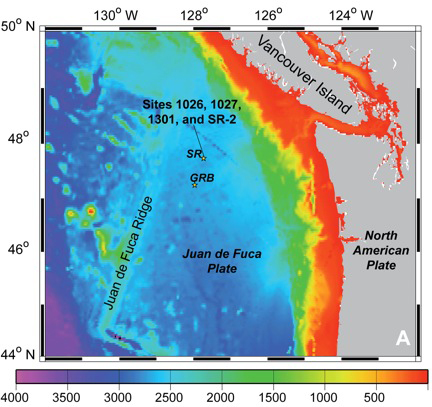 Index map showing the location of Expedition 327 primary drill sites, in the Second Ridge (SR) area, about 100 km east of the Juan de Fuca Ridge. A secondary target for Expedition 327 operations was adjacent to Grizzly Bare (GRB) outcrop, where regional hydrothermal fluids are thought to recharge the oceanic crustal aquifer.

The JdF major program emphasizes a ridge-flank hydrothermal system that represents an important end-member in terms of crustal temperature, redox state, and through-put of fluids (and associated solutes, inoculum, etc). Results from this area are especially important in comparison to results derived from the NP and DO major programs. The latter is a system operating at much cooler and more oxic conditions, which may be characteristic of a large fraction of young and well-ventilated volcanic crust, whereas JdF is more typical in many ways of older sites where there is much more limited exposure of permeable basement rocks to the overlying ocean. The JdF major program is also distinct for being the first at which controlled, cross-hole experiments have been completed, including the first tracer-injection experiment in the ocean crust. In addition, the JdF studies have produced the longest time-series records of subseafloor conditions, including high-quality and large-volume subseafloor samples collected from multiple boreholes and depths.

Results of the first three-dimensional simulations of fluid circulation within a ridge-flank hydrothermal system were published in Nature Communications (Winslow and Fisher, 2015), and a more detailed study is in review at J. Geophys. Research (Winslow et al., 2015). Field studies and analytical models have shown that there is large-scale fluid flow in the volcanic ocean crust in the JdF region, including vigorous local convection and circulation between basement outcrops separated by ~50 km. Key field observations that help to constrain new simulations include a modest range of flow rates between recharging and discharging outcrops (5-20 kg/s), secondary convection adjacent to the recharging outcrop, crustal permeability determinations made in boreholes, and the lack of a regional seafloor heat flux anomaly as a consequence of advective heat loss from the crust. New models demonstrate that sustaining flow between outcrops that penetrate less-permeable sediment depends on there being a contrast in transmittance (the product of outcrop permeability and the area of outcrop exposure) between recharging and discharging sites, with discharge being favored through lesstransmissive outcrops. Many simulations include local discharge through outcrops at the recharge end of an outcrop-to-outcrop system. Both of these characteristics are observed at the JdF field site. In addition, smaller discharging outcrops sustain higher flow rates than larger outcrops, which may help to explain how so much lithospheric heat is extracted globally by this process. Three-dimensional simulations are most consistent with field observations when models use a narrow range of crustal permeability, about 0.1 to 1 Darcies, and the crustal aquifer is ≤300 m thick, values consistent with borehole observations. Simulations also show that fluid flow rates and crustal cooling efficiencies are an order of magnitude greater in three-dimensional simulations than in two-dimensional simulations using equivalent properties. Simulations including discharge from an additional outcrop to the north of the field site can also replicate field observations, but tend to increase the overall rate of recharge and reduce the flow rate at the primary discharge site. These simulations will form the basis for future modeling studies during C-DEBI Phase 2, with new models incorporating more complex patterns of heterogeneity in crustal properties and associated variations in reactive transport. 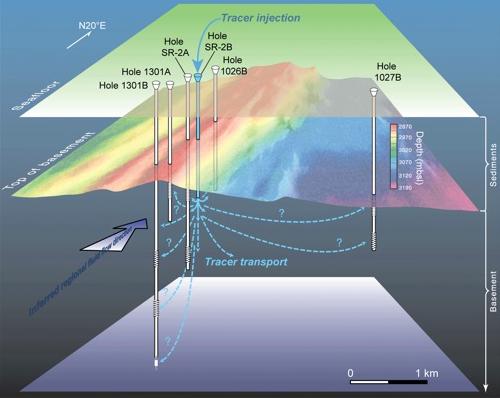 Perspective diagram showing relative locations of drill holes, each of which contain a long-term, subseafloor observatory (CORK), as used for cross-hole pressure testing and a tracer injection experiment. The color contours in this figure indicate depth to the top of basement, which contains the primary hydrothermal aquifer. Original image courtesy J. Cowen, University of Hawaii.

A study based on the first cross-hole tracer experiment in the volcanic ocean crust was completed and submitted during the 2015 review period (Neira et al., 2015). This study tracked the injection and transport of a dissolved gas tracer (sulfur hexafluoride, SF6), using an array of CORKs instrumented with autonomous fluid samplers. All of the fluids used for this study were collected using wellhead samplers, 10 with tubes and fittings that connected the samplers to crustal intervals hundreds of meters below the seafloor. During the first three years after tracer injection, SF6 was transported both north and south through the crustal aquifer, with an observed tracer transport rate of ~2 m/day. This is orders of magnitude faster than inferred from either thermal and chemical observations and/or the results of coupled fluid-heat flow simulations (described above). Taken together, these results suggest that the effective porosity of the upper volcanic crust, the volumetric fraction of rock through which most lateral fluid flow occurs, is <<1%, with most of the fluid flowing rapidly along a few well-connected channels, and the rest of the crust being dominated by diffusive and reactive processes. This finding is consistent with the heterogeneous (layered, faulted, and/or fractured) nature of volcanic upper ocean crust, and will require careful representation of physical and geochemical characteristics in future reactive transport models (e.g., relatively low specific surface area for reaction, limited interaction between microbes and flowing fluids). Additional work is underway to analyze tracer concentrations in downhole samples recovered in Summer 2014 from four CORK systems (deJong et al., 2015). These samples provide critical information on tracer transport during the four years following tracer injection, including a time period that is not represented in the seafloor samples analyzed to date, prior to wellhead instrumentation of new CORKs installed on IODP Expedition 327.

Lin et al. (2015a) evaluated basement fluid samples collected from three CORKs in the JdF region, finding dissolved free amino acids (1–13 nM) and dissolved hydrolyzable amino acids (43–89 nM) in the volcanic upper crustal aquifer. The amino acid concentrations in the ridge-flank basement fluids are relatively low, but similar to those found in deep seawater. Potential sources of amino acids in the basement fluids include: amino acids in deep seawater that recharges the crustal hydrothermal system, in situ amino acid production, and diffusional input from overlying sediments. Thermodynamic modeling shows that amino acid synthesis in the basement can be sustained by energy supplied from inorganic substrates via chemolithotrophic metabolisms. Furthermore, an analysis of amino acid concentrations and compositions in basement fluids support the hypothesis that there is ongoing heterotrophic activity in this system. Similarly, the enrichment of acidic amino acids and depletion of hydrophobic ones relative to sedimentary particulate organic matter suggests that surface sorption and desorption alter amino acids in the basaltic basement. In summary, although the oceanic basement aquifer is a net sink for deep seawater DOC, similar amino acid concentrations in basement aquifer and deep seawater suggest that DOC is preferentially removed in the basement over dissolved amino acids. This study also suggests that organic carbon cycling occurs in the oceanic basaltic basement, where an active subsurface biosphere is likely responsible for amino acid synthesis and degradation.

Lin et al. (2015b) completed a study of dissolved and particulate organic matter in sediments overlying basement that is close to the Grizzly Bare outcrop, the primary site of hydrothermal recharge for this ridge flank. They found that sedimentary DOC increased from 0.25 mM at 1 m below the seawater sediment interface to a maximum of 0.86 mM at mid-depth (8–11 meters below seafloor [mbsf]), before subsequently decreasing to a minimum of 0.10 mM at the sediment/basement interface. Thus, the oceanic basement appears to be a net sink for sedimentary DOC in this location. This finding is complementary to work by Orcutt et al. (2015) and Lin et al. (2015a) indicating that microbial processes in the volcanic upper crust include significant oxygen removal. Sedimentary DOC and alkalinity profiles were similar, and inversely mirror those of sulfate, suggesting that the buildup of DOC in pore water in the middle of the column is related to remineralization of sedimentary POC.

Ongoing studies have also explored the nature of viruses in the volcanic ocean crust (Nigro et al., 2015a, 2015b, Steward et al., 2015). While viruses undoubtedly affect the ecology of microbial communities inhabiting this high-pressure, extreme environment, their significance remains mostly unknown. Recent improvements in sampling infrastructure have allowed the processing of large volumes of crustal fluids (thousands of liters) retrieved from JdF CORKs. Analysis of TEM images revealed distinct viral morphologies (rod and spindle-shaped) that resemble the morphologies of viral families infecting archaea. There are very few, if any, direct observations of these viral morphologies in marine samples, although they have been observed in enrichment cultures and their signature genes detected in metagenomic studies from hydrothermal vents and marine sediments. Analysis of metagenomes from the JdF crustal fluids revealed sequences with homology to archaeal viruses from the rudiviridae, bicaudaviridae and fuselloviridae. Prokaryotic communities in fluids percolating through the basaltic basement rock of the JdF are distinct from those inhabiting the overlying sediments and seawater. Similarly, our data support the idea that the viral assemblage in these fluids is distinct from viral assemblages in other marine and terrestrial aquatic environments. This study also suggest that viruses contribute to the mortality of deep subsurface prokaryotes through cell lysis, and viruses may alter the genetic potential of their hosts through the processes of lysogenic conversion and horizontal gene transfer.

These biogeochemical and microbial studies could not have been completed without large volumes of pristine fluids from deep below the seafloor; this technical capability did not exist prior to CDEBI Phase 1. Developing and applying a series of linked tools that permit access to samples of this kind (clean CORK observatory sealing and sampling systems, long-term pumps with inline filters, autonomous instrumentation control, etc.) comprises a significant technical achievement. The studies described above, and additional work documented in the the 2015 C-DEBI Annual Report bibliography, shows the way forward into Phase 2 of C-DEBI. Thermal, tracer, and modeling studies help to address issues of importance to the Fluxes and Connectivity theme, and environmental, laboratory and theoretical studies are helping to resolve questions related to the microbial Activity and Communities theme and hypotheses involving the Metabolism and Survival theme. The nature of links between the JdF major program and Phase 2 research themes is especially apparent in synthesis studies, which have compared and contrasted JdF results to those achieved with samples and data from other settings (e.g., Lever et al., 2015; Orcutt et al., 2015).